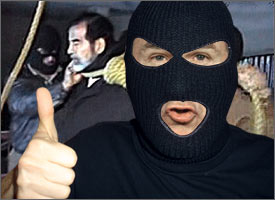 THE PRESIDENT: Today, it is with carefully rehearsed gravity that I bite my tongue to keep from bustin’ a gut while announcing that Osama bin Hussein: the Butcher of Baghdad, rumored Al Qaeda enthusiast, and failed murderer of my dear ol’ Poppy, was executed by dudes wearing surplus IRA ski masks after receiving a totally fair kangaroo trial on the TV – exactly four years after being sentenced to death in the basement of the Pentagon.

It was the kind of lopsided charade of justice denied to victims of his brutal regime, and to current residents of Guantanamo Bay. Once again, the mega-awesomeness of democracy-at-gunpoint has proved its moral superiority. What is the difference between barbarism and civilization, you might ask? Lawyers.

I confess to being very sad right now. Not because Saddam is dead, but because while I’m here in Crawford, my little chart – the one where I put a big black “X” through the faces of my enemies once they’ve been slaughtered – is all the way back at the Oval Office. And now I have to wait until next week to “X” that sucker out!

Nevertheless, I’d like to take this moment to make a joyful noise unto the Lord, and sing a famous Negro spiritual in honor of Grandpa Rape Room crapping his pants on the gallows:

Whoa. Suddenly I’m reminded of that scene in the South Park movie – you know, where Saddam is sucking Satan’s cock in hell? Man, I love those South Park fellas. Every time a president named Bush calls someone a villain, they go and make a hi-larious movie about how… villain-y he is. Now them’s my kind of super-irreverent rabble-rousers! I hear their next project is a claymation flick where that peace-loving cunt who hangs out by my driveway gets disemboweled by a righteous mob of dudes from FreeRepublic.com. (Thumbs Up.)

But I digressify. I am pretty confident that Our Lord Jesus Christ is prank calling Saddam in Hell right now, and is all “WHERE’S YOUR MOO-HAMMED, BUTT PUNCH?” Between you and me, the Son of Man hated that motherfucker. Trust me, I know. After all, He did command us all to “love thine enemy.” And I’ve loved every minute of that dune coon’s much-deserved bitch-smacking, if for any reason, it’s the only thing that’s gone right or according to plan in Iraq. Shit. I think I already miss the fuckwad. In the impossible event that Allah actually exists, here’s hoping Saddam’s 72 black-eyed virgins don’t all have moustaches like most Arab broads.

With the death of Saddam, of course, will come eternal peace and happiness throughout the Middle East. Verdant oases will spring from parched patches of blood-spattered desert. Camels will poop roasted garlic hummus. Sunni and Shia will skip through Baghdad hand in hand. And one day in the future, in the middle of the brand new gambling Mecca Al-Vegas, the Iraqi people will erect a ginormous statue in my honor. In the meantime, we will stay the course in Iraq, after we give that course a new paint job and shocks. It’s totally not a futile effort, like asking for a window seat mid-flight on United 93.

Thank you, and may God continue to bless America by facilitating the death of anyone I hate. 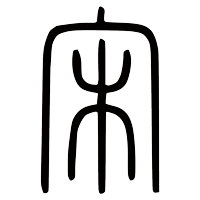